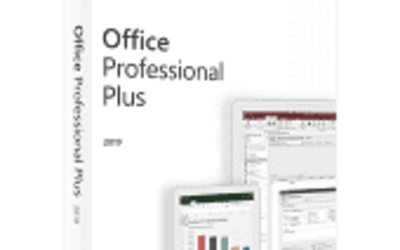 Office 2019 includes the desktop applications Word, Excel, PowerPoint, OneNote and Outlook. On Windows, Publisher and Access will be added. These applications are provided as a package as part of Office 365. Additionally, Microsoft has released new versions of Visio and Project for Windows as part of the Office launch.

On July 4, 2016, Microsoft made a 64-bit version of Office 2016 for Mac available as part of the Office Insider Program, with a general release on August 22, 2016. The 32-bit version continues to be maintained.

Licenses for Office 2018 for Windows and Mac OS can be purchased at retail and subscribed to as part of Office 365. Educational institutions, as well as students, teachers and faculty, sometimes receive Office Professional Plus 2016 (Windows) or Home & Business 2016 (OS X) for free via Office 365 access through the institution, depending on the institution's contract. In some cases, universities charge a processing fee. Students can check their eligibility to receive Office Professional Plus on a website

The new version of the Office suite is supposed to be released in fall 2021, and now Microsoft has published the first preview version of Office 2021. Besides the online version Office 365/Microsoft 365, Microsoft still offers an offline alternative of its Office programs.

The most important Office programs Word, Excel and PowerPoint are always included. Depending on the version, Outlook, Access and Publisher are also added. Office LTSC is an offer aimed at larger companies.

Office LTSC must be purchased per device, but the license does not need to be renewed after purchase. At launch, Microsoft will increase the prices for Office Professional Plus, Office Standard and the associated apps by ten percent. Microsoft also holds out the prospect that another stand-alone version without a subscription will be released after Office LTSC.

Microsoft will continue to offer the cloud solution Microsoft 365 as a favored solution alongside Office 2021 and Office LTSC. For more information and to purchase a license, send us a